Random Notes: News You Can Use 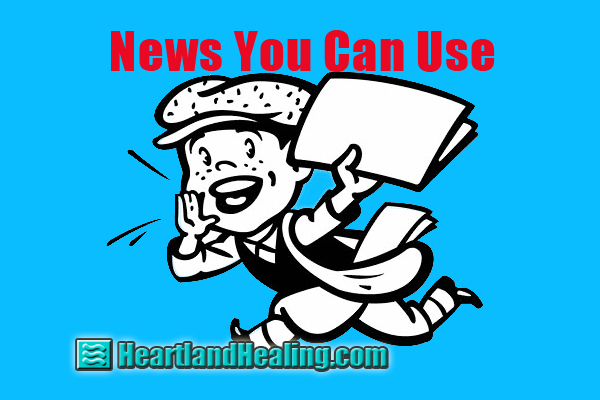 Random Notes: News You Can Use

Time once again for a potpourri, a compendium if you will, of items of interest that have skated across the glazed landscape of my mind recently that have previously escaped comment. Snippets.

Vaping — Who’d a thought?  (CDC.gov news)
I have a few friends who are military veterans. Me? I got drafted but something happened between the “Greetings” letter and basic training so I don’t count. But lots of my vet friends who served in the various Gulf Wars starting in 1992 tell of massive burn pits where war materiel of unknown sorts was incinerated, releasing plumes of toxic smoke for months, years. Iraqi oilfields were set ablaze for weeks. This left everyone in the region with serious lung problems due to the fetid atmosphere. Many of those problems have become life threatening and chronic. Which leads to the current kerfuffle over vaping. How is it that someone’s common sense escapes them and they willingly heat oil to the vapor point then breathe it into their lungs? Let’s see, breathing in oily mist. What could be wrong with that? Ask a Gulf War vet. And you need researchers and government agencies to tell you breathing in oil globules is not a good thing?

Tighty Whities and Other Worthless Medical Procedures — So many! (Medical Reversals) You know those tight, white compression stockings hospitals make so many patients wear? The ones that probably get billed at $500 a leg? Well, they’re hardly worth that. In fact, researchers have found they are worthless. Seems a massive study looked at hundreds of medical procedures we have been using, sometimes for decades, and found that there is no statistical basis that they actually are worth doing. That includes mammograms, of course. Having everyone in Intensive Care use gowns and gloves did nothing to cut back on spread of antibiotic-resistant infection. Talk therapy works better than drugs for insomnia. Menopausal hormone therapy doesn’t do the job. Wearable technology (think Fitbit or Apple Watch) does nothing to help a person lose weight. Knee problems? This research found cases where physical therapy, (cheaper, less invasive), was better than surgery. There are so many entrenched medical methods that just do not work and / or are not cost-effective. But we suffer them anyway. This study used data and research from Lancet, Journal of the American Medical Association and New England Journal of Medicine. What we really need now is a study that shows how much more effective holistic therapies are than conventional ones. Open the door for herbalists, acupuncture, hypnosis, ayurveda and more.

Universal Consciousness Does the entire Universe have a consciousness? (BigThink.com) This isn’t news to me but now prominent scientists are on board with the idea. It’s called panpsychism and it means that pedestrian viewpoints of what consciousness is are just that: pedestrian. A commonly held view is that consciousness is materialistic. That is, awareness is no more than the firing of neurons in our brain. But there is evidence of more to it than that. The late John Archibald Wheeler, the scientist who coined the term “black hole,” believed that proto-consciousness is evidenced by quantum mechanics, where particles don’t express shape or location until observed. What links the viewer with the viewed? Consciousness is the answer. Any fan of Star Wars will tell you “the Force” is a conscious entity. Astrophysicists like Gregory Matloff pose the idea that stars display conscious actions as evidenced in Parenago’s Discontinuity. It’s only radical if you don’t understand the theorem. I remember when I was young that the prevailing wisdom was, “Animals don’t think.” Well, we certainly know that has changed. So why not consider that maybe the Milky Way is watching? Richard Feynman — what a guy.

Junk in Your Trunk Amazing! A study has come out that links the indulgence of eating processed foods with obesity and poor health! The real problem is that we have become a society that is dependent on information being force-fed to us rather than evaluating what our senses could tell us on their own. Case(s) in point are that we use a weather app to see what the weather is like or going to be like during the day; we use a smart watch to monitor our heart rate and such, further isolating ourselves from being in touch with our bodies and our health and so much more. So the fact that we need researchers to tell us that “food” made of suspect components and assembled in various ways to become “processed” is actually bad for us is hilarious. Look at the way we assess the value of stuff we buy in the supermarket. We pick up an item and look at the industry mandated and controlled “ingredients” and “Nutritional Data” on the package. If you have to do that, you’re buying the wrong food. Real food doesn’t need labels to tell you about it. Think broccoli, apples, fish, artichokes, beef, dry beans, bananas and so on. If it comes in a package, it’s processed. Stay in touch with yourself by being in touch with yourself.

That’s all the news for now.

Heartland Healing is a metaphysically based polemic describing alternatives to conventional methods of healing the body, mind and planet. It is provided as information and entertainment, certainly not medical advice. Important to remember and pass on to others: for a weekly dose of Heartland Healing, visit HeartlandHealing.com.
2019.09.17